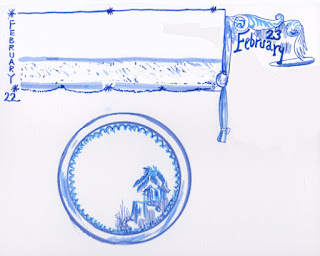 I have not forgotten you my Bloggin' Friends! It's just that my mother's personal life resembles that of a mid-twentieth-century movie star that I am having fun just writing about it. As for my own images, my life resembles that of a fifth-century Christian hermit making up theology in the desert. Who would you want to read about, sunglasses, kerchief, and all? If I want to publish this memoir of Mama I'll have to edit it carefully. These blue designs are inspired by old-fashioned crockery that would be your "ordinary" dishes. I so rarely make a circular design it's nice to try it out again. Grandma, may I have another piece of apple pie?

Posted by Pyracantha at 6:06 AM No comments: 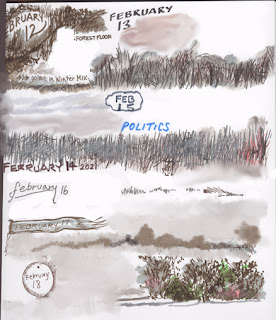 And here is Virginia in the dead of Winter, lots of date stamps and nothing to gain. These are realistic colors, there is always some bushy red or chrome green thing even in the most monochrome scene.
Photoshop with markers on sketchbook page, 8" x 9", February 2021.
Posted by Pyracantha at 3:57 AM No comments:

Get de-worded and eat something warm and vegg for this low point, this Feb-dead of winter, where I keep my Doodles in almost monochrome. Squirrels and foxes are hiding in their lairs and I am hiding in my dusty dust-cupboard, wondering whether I will ever get back to sipping at a cafe. Seems like the night lasts forever.
Watercolor markers on sketchbook journal page, 8 1/2" x 3", February 14, 2014.
Posted by Pyracantha at 5:13 AM No comments:

I want it to be over 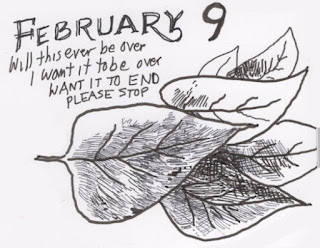 The whole world feels this way, including you. and all of us are living in privilege. I might as well do a little blog action to show that I have not abandoned the By-Product. Just think, in spring these magnolia leaves will be hosting big fragrant white flowers the size of crock pots. And maybe even I will actually cook something edible. Meanwhile I left some verbiage on the date stamp before I go fill myself with tasty but hostile substances like whole wheat cookie biscuits, fudge, and mini-candy bars to distract myself from the world. Well there's a little bit of real apple somewhere too, it can't always be my enemy. I wield the Apple Peeler!
Black tech pen and markers on sketchbook page, 3 1/2" x 2 1/2" (size of a credit card), February
2021.
Posted by Pyracantha at 3:22 AM No comments:

Not So Much Hiatus for the By-Product; "Groundless" shows up and sees his shadow

I stayed up well past even my usual ridiculous hour of going to bed so that I could see the ceremonial presentation of "Punxsatawney Pete," the weather-predicting groundhog of Pennsylvania. Other than his pseudo-Masonic handlers, Pete was sent to social-distancing and the cuteness was by remote control. I enjoyed the "Pennsylvania Polka." Well here's "Groundless" with his message to the world. Stay cold, vaccinators!
Posted by Pyracantha at 4:48 AM No comments: 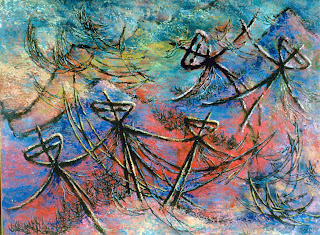 No artist succeeds alone, by him-or-herself. They always have someone whose contacts and networks give them an opportunity to advance. This is true for Esther as well. In the mid-thirties she worked in the ancient textiles and antiquarian department of the Boston Museum and this connected her with many antiques, arts, and crafts specialists, including the renowned Boris Mirski Gallery on Boston’s art-centered Newbury Street. In the mid- 40s and later, Esther pieces were shown there.

Another Esther helper was very practical: Harold Shapero, who had carpentry skills, helped her assemble frames and reinforced hardboards for the larger encaustic pieces. You can still see their handwork on the back of the big panels, as well as Boris Mirski’s elegant ancient Greek adhesive design identifying the piece.

But the most important thing in Esther’s early career, besides the fundamentals of art-making, encaustic, and studio techniques, was the art colony culture that she entered in the 1940s, at the “MacDowell Colony” (now called just “MacDowell”), and elsewhere, which gave her great networking opportunities as well as lifelong friends. 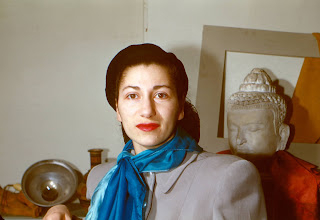 Publicity photo of Esther, mid 1940s. You can see some of the folk and antiquarian pieces which were featured in the Boris Mirski gallery.
Black beret...Vive la Resistance!

Posted by Pyracantha at 2:42 AM No comments: 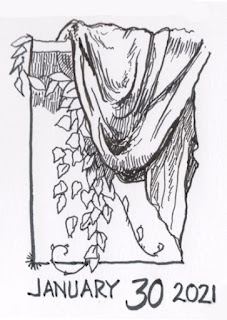 Join the "Ivy League" with my little page accent for Plantworld 2021! Drapery and a rag do the job of making things greenish. There's an infinite amount of gardening to be done in all those other universes. In fact, there's one exactly like yours, you just don't know where it is nor could you reach it if you tried. But don't worry, a devoted green alien is watering it for you.
Black tech pen and marker on journal page, 2 1/2" x 3 1/2", January 30, 2021.
Posted by Pyracantha at 5:38 AM No comments: