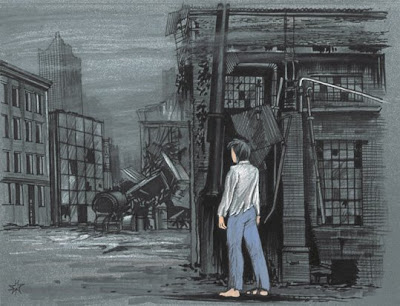 Dhalgren, a book first published in 1975 by the avant-garde science fiction author Samuel L. Delany, is often considered unreadable. That's why I decided to read it in 1994, all the way through, to see why it was so controversial. I managed to get through the whole book and it was quite memorable, though definitely not inspiring or uplifting. I did some small illustrations from it at the time and am still considering doing more of them, especially in digital form. This image above shows the protagonist, a mentally addled young man who wanders around the destroyed city wearing only one shoe (a fetishistic touch that Delany repeats in other books).
Ink, pencils, and gouache on grey paper, 11" x 8 1/2", 1994. It was quite a job to recover the original colors from the faded slide, and I had to re-color the figure in Photoshop. Every day I struggle with obsolete media which are on the edge of fading into destruction. For instance, I have so far failed to re-activate the driver software and contact for an MP3 music player ("Creative Nomad Zen Xtra") which I acquired in 2004. As of now, it's a hunk of unusable junk, not worth the effort to work on. What cherished artifact or image will be next on the media trash heap?
Posted by Pyracantha at 4:07 AM