I've been in domestic urban captivity for about 8 months now and I must admit I am getting weary. Yeah, that's the word. There must be many people just like me. I go out only to get food and supplies, I haven't ordered delivery because I am from another era where this is not done, and no one delivers stuff at 4 AM.
I've faithfully posted to the By-Product all through this dreary era in my life, and I'm working on my biographical project about my mother and her life and work, but both of these are based on Blogger, the blogging software you see now. I may have to put things on hold in order to continue. I also have to save my blog archive (which must be huge by now) because it is a masterpiece of western culture. (NOT)
I managed to retrieve the address for this posting from Facebook. I need to try another operating system, Firefox. What happens when your computer fails due to obsolescence while maintaining social distance rules? Why didn't I learn this stuff when I was a kid? Because there wasn't any of "that stuff" going on when I was a kid. I stuck with comic books and classic TV shows.
I better stop now. The leafy border above is in the "wine decoration" style and I sure wish I had some wine right now but I don't, so if you don't see the By-Product please excuse my technical difficulties.
Black tech pen and marker on sketchbook journal page, 4 1/2" x 6 1/2", January 27, 2021.
Posted by Pyracantha at 4:26 AM No comments: 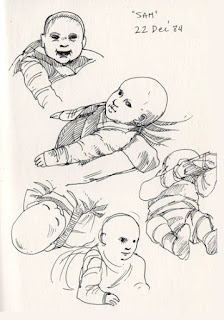 In these sketches, "Alien Basketball-Head Sam" is already a growing boy at five months. I pushed him through the streets of Cambridge in a stroller. I was his Auntie as he grew older. If he were your son, you'd do the same. I'd rather be an aunt than a mother, but since I can't be an aunt (no siblings) I'll be fine by being someone else's family memory.
Black tech pens on sketchbook page, 5 1/2" x 7 1/2", December 22, 1984.
Posted by Pyracantha at 5:15 AM No comments: 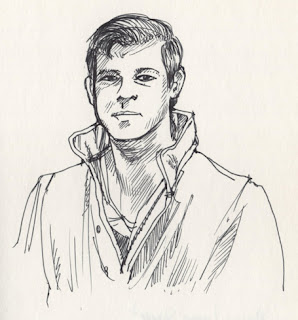 I made a few non-fantasy dollars at conventions drawing portraits. These were usually miniatures used as portrait ID's. If there was time, I would sit my client down and do a sketch like this one and then work it into a color portrait when I got home. Given the date of this picture it's likely that I drew him from life. The portraits had the wearer's name ("Steve") and were about the size of a credit card, though I only took cash.
Black tech pen on sketchbook page, 5" x 5", November 1984.
Posted by Pyracantha at 6:07 AM No comments:

This 2021 plant-image border is properly "de-worded" for public consumption. I  am still having technical difficulties here, simple operations are taking long minutes and I may have to resort to another operating system. This slowdown is frustrating. Meanwhile I am working on my mother's "biography." She sure did paint a lot!
Tech pens on sketchbook page, 8" x 3", January 23, 2021.
Posted by Pyracantha at 4:36 AM No comments:

By 1939 Esther Geller was engaged to a military gentlemen named Chester Susskind. In 1940, Chester went off to war...and never came back...or so they thought. There were plenty of admirers and studio parties left in the Boston area. Harold Shapero had been declared unfit for military service ("4F") due to emotional instability.

Meanwhile, Esther was not just having fun at the Museum School. She was a member of an elite group under the direction of Karl Zerbe, a German immigrant who was bringing back the thousands-year-old painting medium of encaustic. This medium had been used in memorial portraits due to its durability. Encaustic is pure pigment mixed with beeswax strengthened with natural resin. Zerbe used this highly technical means to create paintings with gloomy ethnic and surrealistic themes, influenced by the horrors of war.

Esther continued to paint in encaustic and refine her work in the early 40s. She created floating waves and humanoid creatures whose limbs seemed made out of tangles or sheaves of plant roots. I call them her "Root People" and there are dozens and dozens of them, including watercolors as well. Zerbe's encaustics inspired black shadows and eerie moods which Esther would soon transcend.

Meanwhile, Harold, who graduated from Harvard in 1941, still was friendly with Esther. He wrote some of his best music when he was still at Harvard, such as his "Sonata for Piano Four Hands," or his "String Quartet." Esther painted Root People up until the mid-1940s. 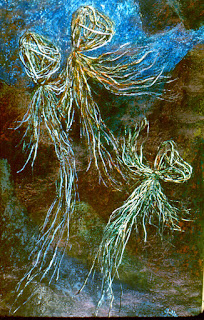 Posted by Pyracantha at 5:32 AM No comments: 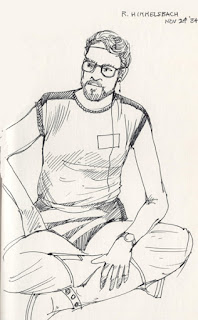 Robert Himmelsbach, master costumer and craftsman, has been my good friend in fandom for decades. He was a stalwart supporter of the Darkover mythos and its creator Marion Zimmer Bradley. I've designed costumes for him and he has collected many art pieces from me as well as posed as a (clothed) portrait model. Here he is at one of our best historical Darkovercons, slightly dressed up.
The usual art tools, the usual art size 5" x 8". I would have loved to do a graphic novel version of a Darkover piece, but Marion strictly rejected it. "I HATE COMIC BOOKS!" she yowled. Probably copyright issues as well.
Posted by Pyracantha at 4:31 AM No comments: 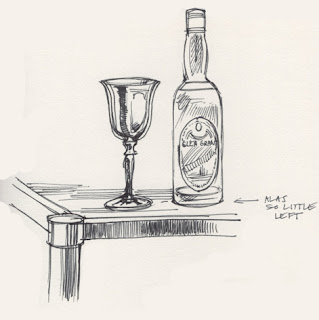 Those of us who were old enough to drink alcohol at conventions held Scotch sipping parties (called "Quiet Gatherings") where we brought out our fancy drinkware. This is the silver-plated goblet I learned to drink Scotch from, when I was living in an artists' colony in Rome. The bottle is a single malt, which we artists couldn't afford. Our little sip meetings were called the "Goblet Club." This was almost 50 years ago.
I still have my 1971 goblet, as seen here, but I can't drink from it. During the Virginia earthquake of August 2011, it fell to the floor and a big crack opened down one side. At least that's what I think happened. I keep it as a memory.
Black tech pen, 5" x  5", November 1984.
Posted by Pyracantha at 4:48 AM No comments: