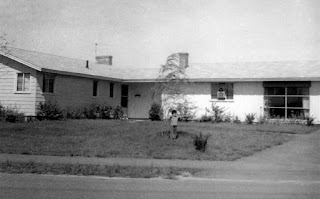 This is the house I grew up in. It was built in 1955, a very typical one-story L-shaped ranch house in a new development in which the heavy forest and much of a hill had been completely removed. The houses had little bushes in front and some saplings planted on the lawns near the street. The large "picture window" at right was in my father's studio along with his piano and music-writing desk. The door to the house is at the corner of the L.

There is a kid standing next to a spindly little willow tree. That is me, aged about 3 years old. You can't see me very well but I'm there. I remember that the willow grew big and gnarly, and then perished for lack of space and water.

My parents lived in this house for 60 years. They didn't take much care of it, except building a large music and social room with lots of windows. By the time I inherited it, the house needed so many upgrades and renovations that it would not be economically feasible to do all the work, unless the buyer was a mid-century-modern fanatic, which they weren't.The house was also infested with animal and insect pests.

Now the landscaping has taken over the house and hides it completely from the street. The back yard and sides are abandoned. The small trees have grown into major street titans. The people who bought this house are developers. They will demolish the old house and probably excavate a lot of the landscaping, too. Then they will build a new up-to-date boring home and sell it for big bucks. The neighborhood is very desirable and they will no doubt find a buyer.

I don't mind destroying the old house. So many memories are encoded into those pale yellow shingles and mid-century interior that I will be happy to say goodbye. I would never choose to live there. I took what I wanted of the hoarded items and historic artifacts, and after my upcoming visit, I'll walk away, I hope, to something new and fresh.

Photo taken in about 1958. Minimal blogging, if any, until I return to winey Virginia.
Posted by Pyracantha at 1:51 AM 2 comments: 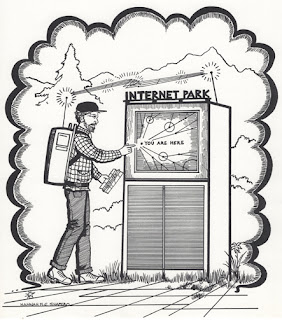 Back in the early days of its development the Internet was a wilderness navigated by trails through the nascent World Wide Web. You had to know where you were going with a Universal Resource Locator. You also had to carry a 50-pound CPU on your back so that your computer could be trekked to one place or another on the Web. Well just kidding about that last one but you can see that even back then you could use a touch screen to learn where you were but it was the size of a refrigerator. They had no idea about smartphones, although they existed on Star Trek. Your manly hiker knew where he was going, though, as the "Cloud" gathers above him.

This slightly cartoony piece was done as one of a set of illustrations for "The Internet Guide for New Users," published in 1993. 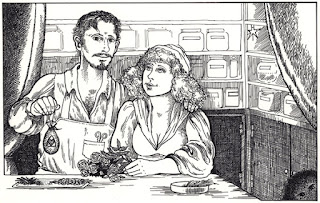 This rather old-fashioned drawing is an illustration for one of the "Lythande Wizard" stories of Marion Zimmer Bradley. I did it for "Marion Zimmer Bradley's Fantasy Magazine," which always featured at least one story by her in each issue. This story was called "The Wuzzles," and was about a village that had been invaded by magical, grain-eating fuzzballs, similar to Tribbles, called "Wuzzles." Wuzzles could only be defeated by magic, but the wizard Lythande was allergic to the magic and couldn't use it without a counter-charm. That, in my memory, was provided by the young pharmacist, here shown holding the magic bag of herbs. His assistant is smitten by him, and at the end of the story the feeling is mutual. So they take on the responsibility of ridding the town of the pests. I'm sure I didn't get all of this correctly but it was 25 years ago. You can just see a Wuzzle poking its fuzzy head into the lower right corner of the image. 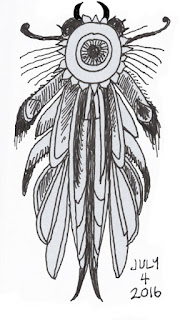 It crawled out of my imagination. I started with a simple shape, a rough oval, and then started drawing shapes around it, making that round shape an insectoid head. I continued adding pieces for its fanciful wings and legs and whiskers. Finally just a little Photoshop to create its mouth parts. And what is this creature built out of abstract forms? An Abstracti-fly, of course. Not a moth, not an ordinary fly, not a cicada, but a colorful visitor in the long summer days, spending its time in the woods doing its biological tasks in a quiet, leisurely way. The eye-like thing is designed to confuse possible predators. This is a macro close-up of the Abstracti-fly. The actual creature is only an inch long. 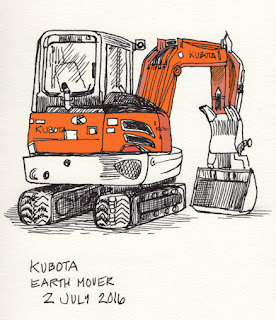 I found this beauty parked in my apartment complex's dumpster area. This Kubota excavator is fresh and hardly used, with only a bit of dirt on its shovel and trackers. It must be someone's pride and joy, it would certainly be mine if I owned it. Look at the jazzy ventilation openings in the orange engine area. It's so stylish. They didn't have to make them that shape but they did. The design features of this machine are aimed at the kind of guys (yes, only guys) who also buy (or wish they could buy) and ride fantastic Japanese motorbikes with their manga-style brilliant colored frames. I wonder how much one of these babies costs. And, my true sentiment, I WANNA PLAY WITH IT. Could I dig too? 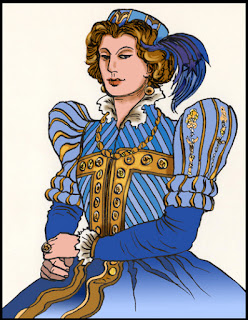 I did this drawing an eon ago. It was probably fan art for the Baltimore Worldcon in 1998, and I have the vague notion that it was an ad for the Costume Show. I have a lot of vague notions these days. I found this copy of the drawing in one of my many image archives and seeing that it was simply drawn I colored it in Photoshop. This is the kind of coloring that comic book illustrators use. The drawing has to be rendered in a careful way so that the shape and edge-finder tools of Photoshop can fill them cleanly with color. If your drawing is too complicated, Photoshop makes mush out of it. And no one wants mushy art. I like these blue colors together. 1998 was a long time ago.

This creature is found all over the world, but it's most famous in Mesoamerica. The Plumed Serpent has hairs and feathers, as well as a scaly body. It can grow quite large, and is a fearsome presence in the woods, where it moves quickly on its snakelike belly with spiky little limbs. When it wants to warn something off, it inflates the sacs you see on the sides of its head, and opens up its mouth to a hideous toothy gape. It could run for office in our current political climate.