The Warlock is No Longer Missing 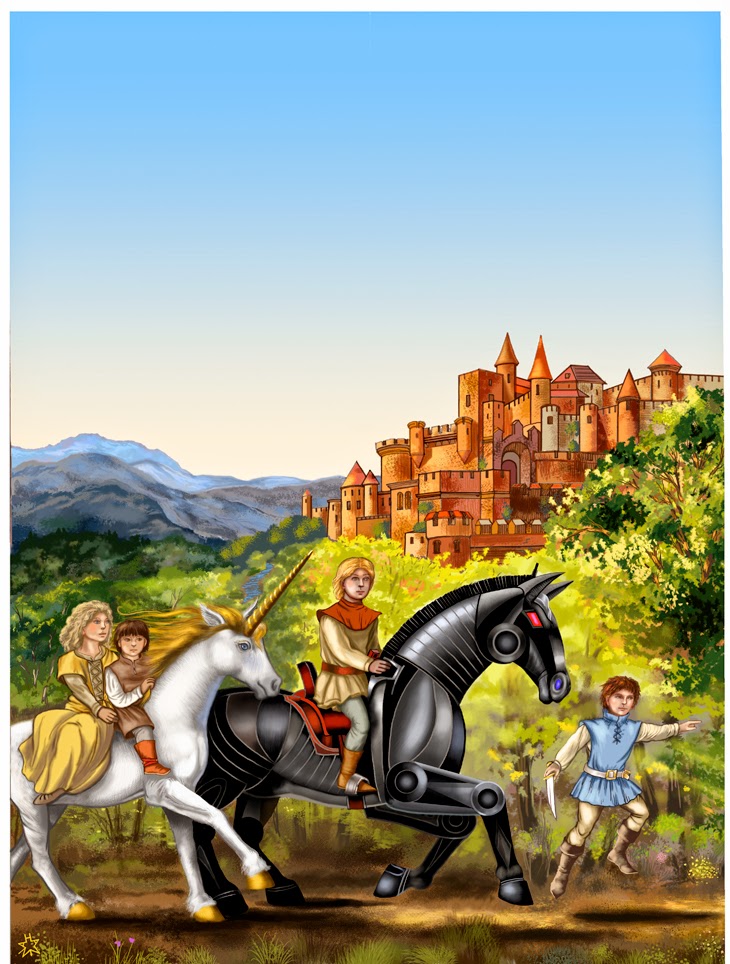 The Stasheff publishers loved my cover art and gave me permission to show the newly finished work on the Blog. So here it is. From left to right: Cordelia and Gregory riding the Unicorn, big brother Magnus on "Fess," the robotic horse, and Geoffrey with his long knife, pointing the way while levitating. All these characters are magical. The four children have set out to find their parents, who have inexplicably gone missing. They go through all sorts of perilous adventures and find solutions with magic and wits.

"The Warlock is Missing" by Christopher Stasheff will be available as an e-book next month.

The sky is wide and empty because this is where the writing goes. The writing has to be big because the image will be shrunk down to thumbnail size on sites or advertising. It prints well and maybe a paper version might be available someday.

Now I must leave the studio and go up to Massachusetts to take care of my ailing 93-year-old mother. I don't know how long I will be away. If I can post an entry here I will do it, maybe done with my iPad. I'll have a lot to do anyway. See you soon if I can. 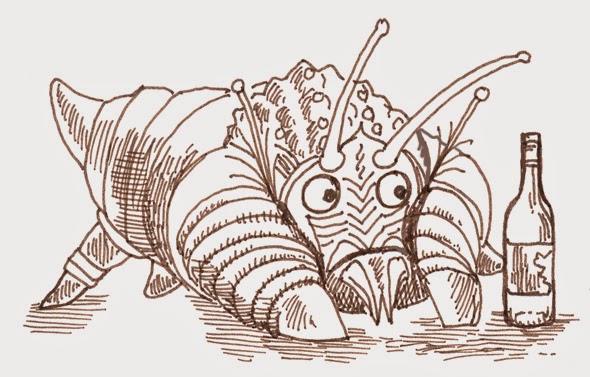 I'm a crabby crustacean, the moon is shining through my window. It isn't a moonshine moon, it's a crabwise moon with a bottle of coastal Chardonnay. And that wine isn't for drinking with my cooked remains, you voracious seafood fan, it's for me to drink in my portable hermitage to alleviate my crabby mood. Can you dig it. I dig in the sand, as the tide goes out. Have a sip, my friends, and rest  easy on the cold spring beach.

Posted by Pyracantha at 5:32 AM No comments: 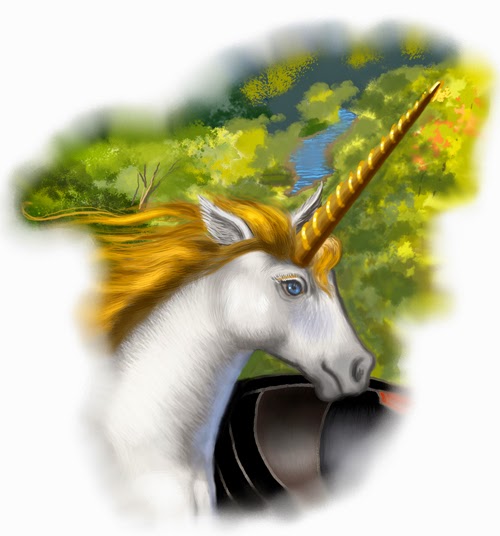 I'm almost done with the big book cover project. Really, almost done. Until the whole thing is finished, here's an excerpt of the unicorn's head. Other elements in the picture show up in the background, to be explained later. This has been much more difficult than I anticipated,  mainly because of the inconvenient process of changing the "brush tools" used in Photoshop. There must be a way to select out your "most used" tools and keep them handy on the screen, but I haven't found it so every time I use a tool I have to re-create it from the basic version. It's frustrating. At least I got to draw horses. Some of you might not know this but I love horses and would love to do more drawings of them. If it ever gets warmer I might be able to draw some of the equines I see in Virginia's horse country or at wineries. But I don't think there are any unicorns there. 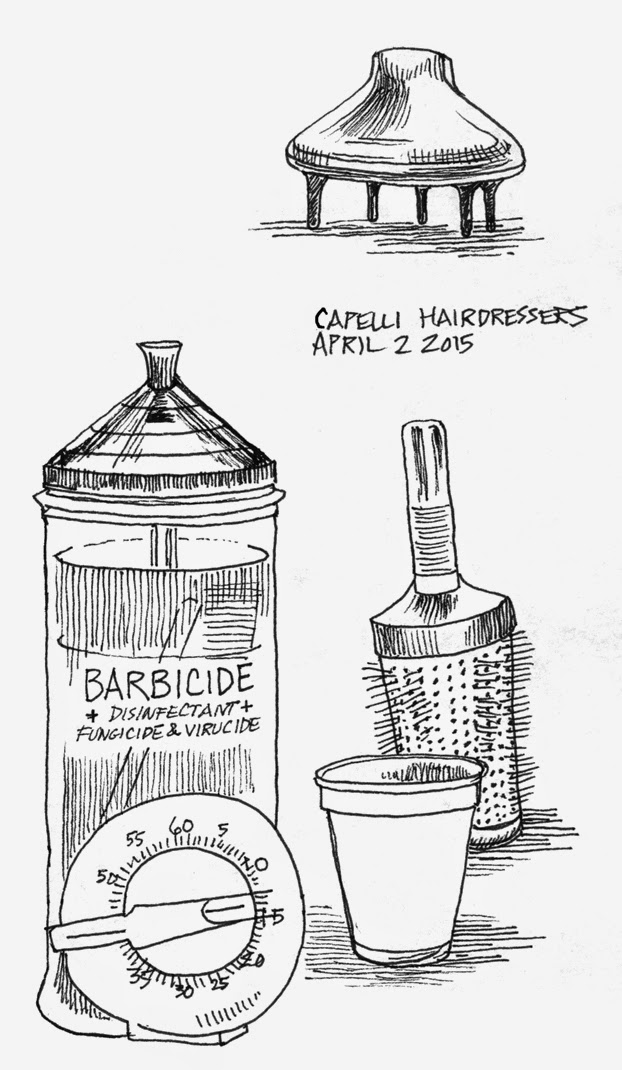 I'll draw anything. Getting my hair done? I'll draw the stuff on my hairdresser's counter. The top thing looks like a UFO but it is only a black plastic hot air diffuser from the blow dryer. "Barbicide" sounds like something that is supposed to kill Barbie, or barbers. The ominous blue liquid in the cylindrical container is actually a disinfectant, as you can see if you read closely. The hairdresser's tools are in the solution to keep them clean. The timer is to measure how long the dye is in my hair. Better living through chemistry! The spiky thing with the handle is not a mechanical porcupine but a blowdrying hairbrush. And so now I have fresh hair. 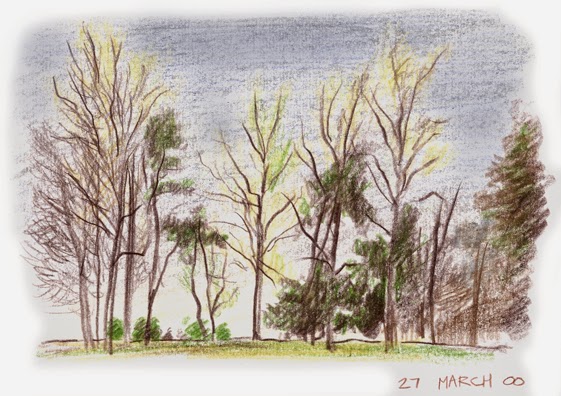 It looks like countryside, but these trees are adjacent to a supermarket parking lot down the street from me. Notice that although the drawing was done in late March, the trees are already greening up with leaf buds. Right now it's red maple blossom time this year and I am very allergic to them. Maples: Drop those flowers and put your branches up. 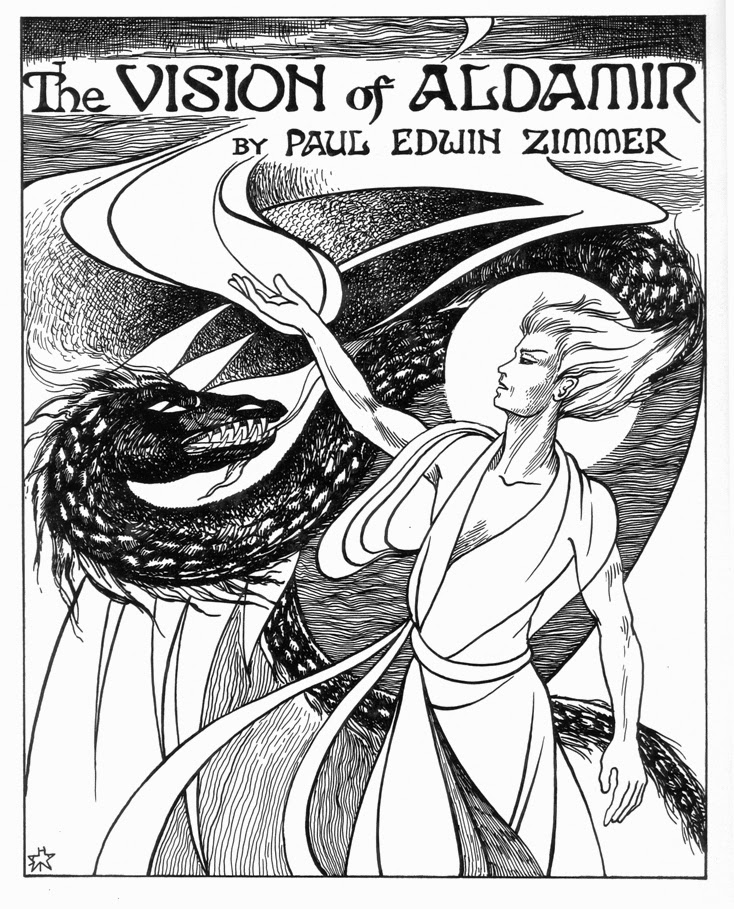 The name "Aldamir" shows up in the work of more than one 20th century fantasy author. Samuel R. Delany uses the name, and so did Marion Zimmer Bradley in her "Darkover" world. This Aldamir story, though, is by Marion's brother Paul Edwin Zimmer. Paul Edwin was quite the character. He never worked (except on his writing), always wore a kilt though he was not Scottish, and chain-smoked. He didn't wash too often, either. Paul Edwin did have some accomplishments, though, besides the writing, which was published but not a big success. He knew all about swords and medieval and Renaissance combat and martial arts. He was one of the founding members of the "Society for Creative Anachronism," a medievaloid fantasy role-playing group which has eaten the brains and lives of many of my friends over the years.

This illustration, along with another one that is even worse, was published along with Paul Edwin Zimmer's title story in "Marion Zimmer Bradley's Fantasy Magazine." It was basically a Tolkien pastiche, adapted to Marion's Darkover mythology. Yes, it's in the same pile as all my other published fan art. I have no idea what is going on in the picture, but I guess, uh, it involves a wizard and a serpentine dragon.