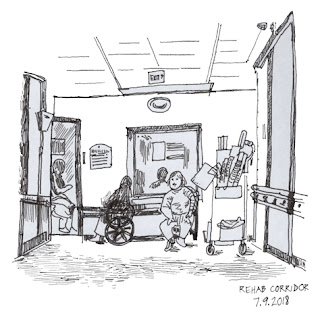 This is a rather wobbly drawing of the inside of the rehab home's corridor. I drew it while sitting in a wheelchair. The rooms open to right and left, and at the end of the corridor is the nurses' station and general administration, with two wheelchair-using patients under watch. Also at right is the pill wagon where medications are stored and dispensed. While drawing this image I was surrounded by staff members who found it fascinating. Some of them had artistic interests of their own and made comments on my sketch as I drew it. The upper level administrators also saw it and made copies of it on an office copier. I am told that this drawing will appear on the rehab facility's monthly newsletter. 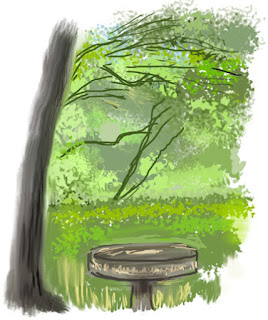 Here is more front landscaping at the rehab home, this time rendered on my iPad. I am pleased that I matched the colors very well. The birdbath is real and as I sat there many species came there to flutter and bathe. The residents are often walked or wheeled through this landscape if there is someone to accompany them for safety. I learned to recognize many of them in my time there. 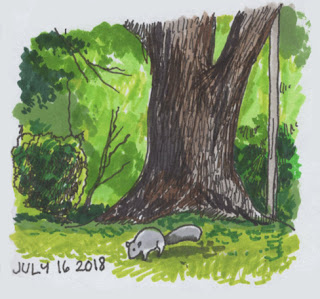 This is what the view looks like from the front porch of the rehab facility. The property is enhanced by two majestic black walnut trees which probably have been there before the building was built. A squirrel grazes on a grassy area in front of the door. I sat in this spot almost every day while I was there, watching this managed area of Nature. 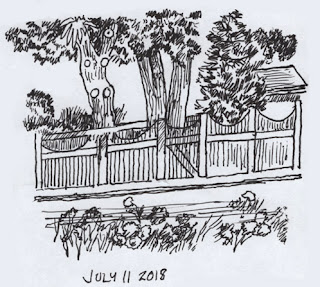 The landscaping around the rehab home was traditional white-painted wood with some reverse archways on the upper level. I later found out that some of it was white-enameled metal. The fence ran around enclosed areas and a nice courtyard. It was comforting in a way but you had to remember that this fence gently kept those inside who tended to wander in their dementia. I couldn't stop thinking that this could be me in my last years. And it wouldn't be a bad place to end up. 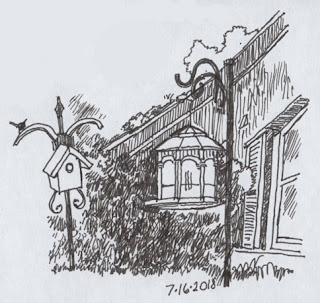 After my hospital stay I was moved to a rehabilitation facility near my home, hidden away in a leafy, affluent urban area. The intention was to help me recover from my operation and consequences but like many others I found it stressful. The facility was lovely, the staff was skilled and caring, and the food was excellent. My problem was the inmates who were suffering from many levels of dementia or chronic illness and often caused disturbances. I won't describe any of these in detail. I consoled myself by sitting out on their small front porch and gazing into their landscaping which was lush and green and habitat to many birds and woodland creatures such as squirrels and chipmunks. I drew a number of small pictures in my sketchbook. This one shows one real bird box (to the left) inhabited by a House Wren, and one imitation bird feeder (no seeds due to risk of rats) in front. I spent more than three weeks in this place. 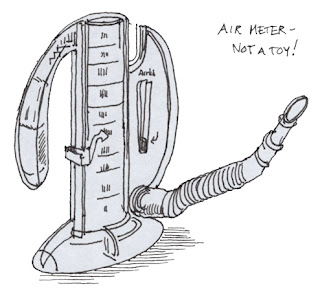 This peculiar instrument with its rather rude proboscis is not a toy or a "specialty" aid. It's a breath meter designed to help hospital inmates retain clear breathing and healthy lungs. You are supposed to suck in air through the tube as much as you can, and it will read out, through adjusted meters on the main stand, how much air you can breathe in. It's supposed to prevent pneumonia or airborne disease by giving you lots of breathing practice. The meter uses a rattle in a column to show your level. I still have mine but I will probably consign it to plastic recycling someday. 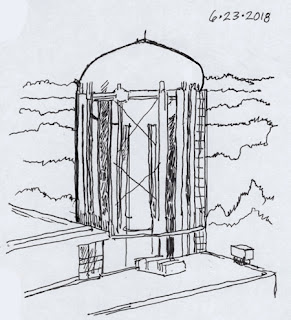 This Asian-looking tower is at the hospital where I was treated. Any modern hospital has to have redundancy of resources in case of a disaster whether natural or human-caused. My hospital was top of the line when it came to resources and modern development. Nevertheless this structure reminded me of Indian or Central Asian religious architecture rather than a water tower. I was on the eleventh floor of the hospital and facing west so I could see a long way over lush summer trees. I also saw some glorious sunsets as the sun sank behind the dome. I spent my birthday, June 25, at the hospital where the staff all signed a printed piece of paper for me and brought me a little slice of chocolate cake. 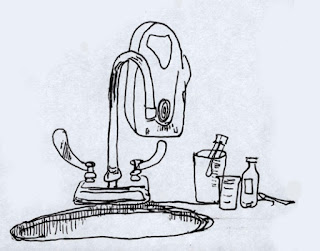 The hospital room had a sink equipped with shiny fixtures which were kept scrupulously clean. Modern germ management was in force everywhere, though one technician complained that this sink spilled water on itself and was hard to keep neat. I thought the curved metal pieces looked like a futuristic waterfowl, partnered by the sterilizer dispenser on the wall behind it. These sterilizing gel dispensers were everywhere, and also made a good on-the-spot cleaner if you needed it.

For some absurd reason I call a hospital a "hotel" in my conversation although there is only a little bit of similarity. 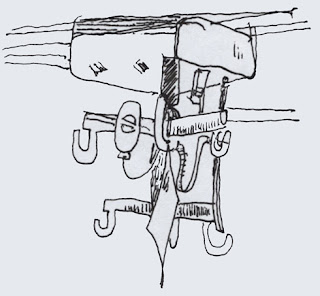 This lifter runs on a track above the bed. It is designed to move other pieces of equipment or larger patients. The load is borne by the hooks you see in the engineering design. The whole thing is made of white enameled metal and it matches other things in the room. The Inova hospital is a marvel of design and cleanliness. I wish my own studio was like this.

I intend to keep blogging on a daily basis though this entry is a little late.

Return of the By-Product

There hasn't been a posting here for more than a month, and one or two of you might actually have noticed it. Well, it's been an ordeal that I hope I never have to repeat. In late June I had a bowel obstruction which required surgery to correct, as well as removing scar tissue and adhesions from an old appendectomy in 1965. After the hospital I was put in a rehabilitation facility for 24 days to recover from the operation and gain strength through physical therapy. I was finally released from the care home with its mixed collection of the aged and demented and stranded sick foreigners. I am hoping that I will not have a recurrence of the problem, but there's no predicting what my guts will do.

The only gadget I had with me was my iPhone from which I do not blog, though I managed to send a few entries to Facebook. I hated typing on the tiny little "keys" and I'm amazed how younger folk and teenagers do it so easily and quickly. I had my sketchbook journal and drew a number of small sketches which I will post in this Blog.

The one you see above is a medical robot which is equipped with all sorts of testing devices to measure blood pressure, heart rate, blood sugar, temperature, and blood oxygen. It makes pinging noises and travels on a swivel base. In my hospital room I was fascinated by the modernistic machinery even when I was pinned down by IV tubes and other worse medical impositions. So I drew them. But then, I draw everywhere.