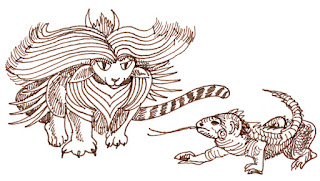 Here we have a confrontation between a glamorously decked out hairy mammalian critter, and a smaller iguanid reptile. This is not about food, as the hairy critter probably won't overcome the iguanid and vice versa. It is about status and display of fierceness, whether it be making your mane stand on end or sticking out your reptilian tongue. It was inspired by my recent experiences driving on the Garden State Parkway and New Jersey Turnpike. 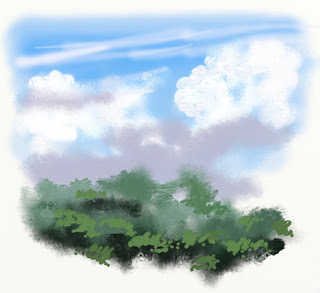 "ArtRage" is an app for the iPad (as well as a regular desktop computer) which simulates real paint and paint textures. While in Massachusetts I did an experimental study from memory of the big summer clouds which drift across the sky at this time of year. I love clouds and I can watch them for hours. This study is done from memory rather than sitting outside getting bitten by mosquitoes. The summer has been moist so far and the Massachusetts house and grounds were full of these pests.

I do wish that the interface between the iPad and the main computer, that is, iTunes, was less complicated. Most of Apple's stuff seems to be created only for sharp young users who can make sense of the mysterious images, multiple pages and blocks, and protocols for saving your work in a format you can work with. For instance why does "ArtRage" automatically save your work in a format called ".ptg" which cannot be read by Photoshop? You have to know enough to go to the "gallery" and find the "export" function (designated by a tiny box with an arrow coming out from it - huh?) where you can choose to save your picture as a .jpg file, before you export it to your main computer using iTunes, when you can find your active iPad icon (another tiny box) that is. Don't attempt to use the iPad and save your work to your main computer unless you are under 25 years old or a professional graphic designer. 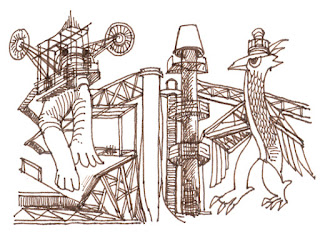 During my stay in Massachusetts I was too busy to do much drawing but I managed to do a few doodles in my "industrial" theme. Michael, the husband of the Diptych Portrait Patron, is an expert in heavy industry such as coal and steel and he has a huge library of exciting books about trains, metalwork, refineries, mills, and all sorts of stuff I love. He's always happy to share his photo library with me so I get more inspiration. This doodle started out as an "Industrial Pattern" but some of the blast furnaces and girder assemblies took on a life of their own and became critters. 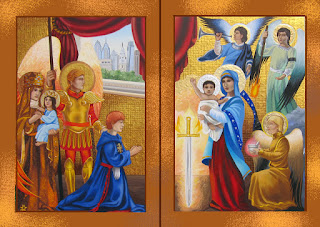 Well, look who's back! Yes, I drove home safely from Massachusetts where I had been helping my aged mother and her art show. Before that, at the beginning of my tour of duty, I delivered the "Angelic Portrait" to its owner. Here is its image. I will explain the components, left to right. The painting is a diptych, two hinged panels meant to fold in the center. It is based on the "Wilton Diptych," an English royal devotional painting from about 1395, showing King Richard II  flanked by his saintly patrons, kneeling before a blue-clad host of holy angels and the Virgin and Child.

The richly clad Queen figure is Saint Anne, whose day is July 26. Saint Anne is one of the patrons of the portrait client whose middle name is Anne. Saint Anne is the mother of the Virgin Mary who you see in light blue as a little girl. In the center of the left panel is the Archangel Michael, a warrior in red and gold Byzantine armor. The red-haired lady in the blue monkish robe is the Portrait Patron.

Second panel: The flaming sword of mystical chivalry floats in front of the holy beings and our portraitee. In the center is the Virgin Mary as an adult, in blue veil and red robe, holding the Baby Jesus, who is waving at us (or blessing us). Behind, in blue with trumpet, is the Archangel Gabriel, herald of heaven. Upper right corner is Archangel Uriel, angel of Death, holding an inverted torch which is an ancient symbol of mortality and extinguishing. In the lower right hand corner in yellow is Archangel Raphael, angel of healing, holding a mortar and pestle with sacred herbs in it.

In the background of the first panel you can see architectural towers out a window. This is the skyline of Philadelphia, near where the Portrait client lives. In the original medieval devotional portraits, you see a castle or cathedral through the window. She wanted to add a real place to the heavenly scene.

I added the gold-colored border in Photoshop but in reality it will be a gilded wooden frame hinged in the middle so it can be folded. The back of the Diptych is a simple shade of blue blending to light blue, with no pictorial elements.

This painting took at least three months to do. The original Wilton Diptych was painted in egg tempera, but I used acrylic in an egg-tempera style to do it. Since it is not that big a painting, and full of details, I used tiny brushes hardly bigger than a cat's whisker.

The "Angelic Portrait" diptych is 2 panels, each 10" x 15" plus gold border (under the frame).
Acrylic on hardboard, first half of 2015.
You are invited to click on the picture to see an enlarged view.
Posted by Pyracantha at 2:24 AM 2 comments: 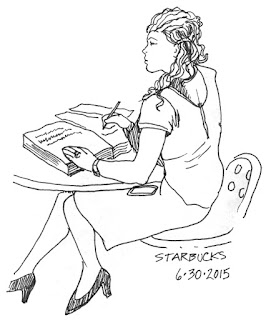 I like the coffee chairs and built interior, but sometimes I do draw the people. This lady was especially elegant, after hours still in her workplace clothes, doing her studies at Starbucks. She had a dreadlock hairdo that curled around in chaotic tubes, but still managed to look professional. I sometimes wonder what these people's occupations are. If she's studying something out of a big heavy book she is either improving her knowledge for rising up in her work hierarchy...or she's learning something new that will get her a better job than the one she's got now. Sometimes I think of doing that, but I don't, which makes me feel guilty even when I finish a smashing picture full of gold paint.

No By-products for the next week or so, parent care and social responsibility again.
Posted by Pyracantha at 2:38 AM No comments: 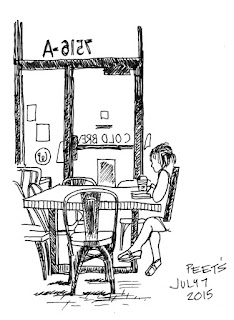 Peet's Coffee isn't so bad. I don't like it as much as Starbucks, for flavor and cost reasons. I often draw in coffeehouses and unlike some other urban sketchers, I don't always concentrate on drawing people. I like the interplay of inside architecture and design, and the world outside. Coffeehouses often use wood for their interior textures, which I like. The wood (rather than plastic or stone) gives it a warm, soft feeling, like sipping a cappuccino. The chairs here, though, are made of solid metal, because of the practical needs of being used by hundreds of people every day. I may color this drawing in so you might see it again.

I have finished the "Angelic Portrait" but I am not presenting it here just yet since someone might pass its image along to the Portraitee, thus spoiling the anticipation. You will see it here next week. 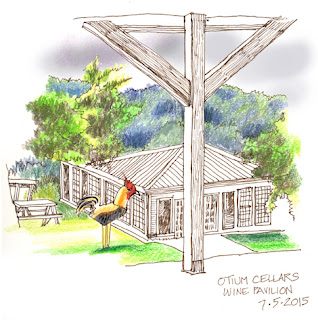 Have a sip on an unusual "Wine Sunday," spent with my Tasting Buddies at the German-style Weinparadies of Otium Cellars, in Purcellville, VA. We enjoyed their off-dry white wines and their rich German reds, Blaufrankisch and Dornfelder. The building you see out there in the greenery is their newly built wine pavilion where you can sit and sip almost all year, even in winter as there is a fireplace in the center of the structure. Otium is one of my Top 5 Northern Virginia Wineries and I love going there. The people are interesting and many bring their dogs, including, during our visit, a beautiful racing greyhound retired from the game to become a beloved pet. Otium also has horses but they were protected from the heat and humidity in their luxury stables.

There appears to be a giant chicken in front of the wine pavilion. This is not a real bird but a folk sculpture of a rooster which is there to add color and humor to the estate.

Finally folks (folk? reader? Mike?) I am back blogifying. My new computer, at least new to me, is working well and I can get back to processing images and doing digital art and graphics. I will not be blogging daily though since I will be at the annual meeting of my religious group this weekend and then two weeks in Massachusetts with the family and my mother's care and art. July in Massachusetts; I'll bring a sweater, boots, and a rainproof jacket.