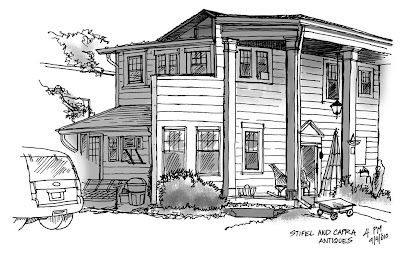 Saturday afternoon in Falls Church, and I'm shopping and drawing at Stifel and Capra, an antiques and cute stuff shop downtown. This building started out as a doctor's residence and office, back in the late 19th to mid-20th century. Then it became a beauticians' school. After that it was divided up into many dealerships as an "antiques mall." Currently it houses two or three dealerships, an art gallery, and studios for a number of artists. I bought some stuff, and then went outside in the pleasant weather to sit on the tailgate of my car and draw the building. I made some corrections and added grayscale tone in Photoshop, back in the studio.
Drawing is Pitt pen on sketchbook paper, about 10" x 6 1/2". September 4, 2010.
Posted by Pyracantha at 2:33 AM

Odd looking building! I am sure you captured it perfectly but it looks like a strange design.

Hey Pyra, I remember your wonderfule sketch (& you are right Tristan she DID capture it!) But hadn't realized you posted it. It's good to see it again!