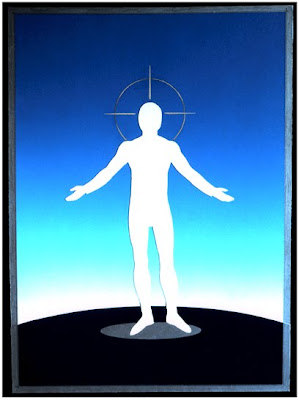 In 1987-1988 I did a lot of cut-paper religious images. They are the "orthodox" version of my Kabbalistic angels. I would airbrush the background, draw the figure and colored pieces, trace and cut them out, and affix them to the background with glue. This was a laborious process but I wanted the smooth color blends and the sharp edges and flat colors of the cut paper. But none of this was permanent. The color coating of the paper wore off or flaked off when bent or scraped. And the iridescent paint I used did not keep its metallic shine, but tarnished. I tried making some larger versions of these in cut and glued felt, but that, too, faded and disintegrated. So when digital art came around, in the form of CorelDraw, I was thrilled because I could do these shapes and blends without having to precision-cut paper. But I didn't have a computer in 1988, and I wouldn't have one till 1991.
This piece is a modernist version of the Transfiguration of Jesus, which is recounted in the Gospels (for instance, Luke 9:28). I eliminated the figures of Moses and Elijah, and dressed Jesus in a spacesuit instead of robes. The transfigured Christ is a white silhouette, more abstract than usual representations, standing on a planet about to be redeemed. A star-halo (restored by Photoshop) is behind his head.
"Cosmic Transfiguration" is cut paper on an airbrushed illustration board background, 9" x 12", January 1988.
Posted by Pyracantha at 12:32 AM