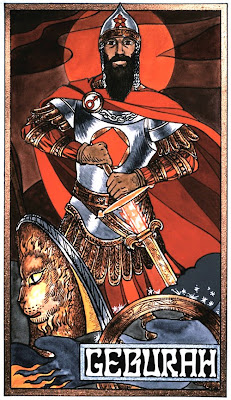 During my esoteric studies in the mid-80s I came across a book, "The Book of Celestial Images," by A.C. Highfield, which was filled with colorful and highly imaginative descriptions of esoteric entities. There were angels and archangels, embodiments of Kabbalistic Hebrew letters, visualization keys, and characters both good and evil. Each sephirah, or station, on the Kabbalistic Tree of Life had a guardian character who could be visualized by the imagination of the esoteric worker. This image here is the one for "Geburah," the fifth of the Sephiroth and the one standing for Mars and martial power. This mythical concept has a long history in Western culture and has many correspondences, such as the planet Mars, iron, weapons, pentacles, and in general the color red, which comes from iron's rust.
Highfield's book was the source of many of my illustrations of that period. I did them in a kind of "storybook" style, influenced by late 19th century Russian illustration. I loved this sort of Western Esoteric practice because there were so many pictures to imagine. I'm not good at a spirituality which doesn't have a lot of images. I painted three of Highfield's Kabbalistic figures but for some reason never painted the other seven, though he describes them in the book. I've still got the book, so you never know when I might get Kabbalistic again.
"Geburah" is ink and watercolor on Fabriano paper, 5" x 9", January 1985. Click on the picture for a larger image.
Posted by Pyracantha at 1:57 AM

Love the look! I am sure others have asked if you ever plan to do a Tarot deck...it would be great!

Tristan: I did the Major Arcana in the "CorelDraw Tarot" but did not do the Minor Arcana. I have indeed been asked about Tarot cards but at this moment I don't know what I could bring to the Tarot artistically which has not been done before.
I do hope to do more esoteric and occult-related art in the future.

What about a Zoroastrian (sp?) inspired deck? Or an Elemental deck?

I am considering doing another one...maybe an Anthro deck!