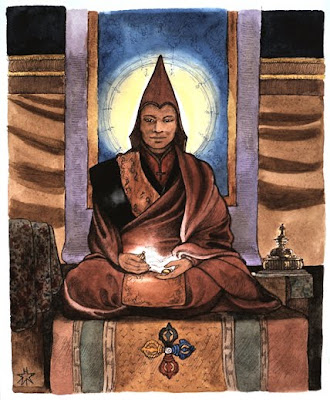 Ever since the British colonialists "discovered" Tibet and fought for it in the "Great Game" of Central Asian geopolitics, Tibet has been a mystical and mythical resource for occultists in the West. The Theosophists of the late 19th century based a lot of their teachings on what they thought was esoteric Buddhism from Tibet. Madame Blavatsky, the founder of Theosophy, claimed to have traveled in Tibet and learned from Tibetan Masters. Alice Bailey, another occult leader in the Theosophical tradition, derived her doctrines from an astral connection to a person known as "The Tibetan," later named "Djwal Khul." Tibetan Masters are part of the Theosophical corps of World Masters who live in inaccessible places but nevertheless send forth their influence into the world. The explorer Alexandra David-Neel wrote fascinating tales of her travels in real Tibet. And later on, there were the writings of life in "Mystic Tibet" of the irrepressible "Lobsang Rampa," actually an Englishman who had never been to Tibet at all.
As an esotericist I was naturally fascinated by Mystic Tibet, since I was also fantasizing about psychic powers which were supposed to be part of the lives of lamas and devotees, even of the general public in that remote land. I wanted there to be Masters, both in the East and the West. Since I hadn't found any real Masters, I made them up. This one is a portrait of an idealized Tibetan Master. There are some authentic details in the picture that I copied from old photos of Tibetan lamas and devotional spaces. I added the halo and the light around the hands, to show that Tibetans could have special powers.
Many years later I met and observed real Tibetans when a number of Tibetan families moved into my neighborhood. Though Grandma wore colorful native dress, I did not detect any psychic abilities among my neighbors. They just seemed like one more of the myriad ethnicities who populate my general area. They adapted quickly to the new country. One driver, referencing a Tibetan beast of burden, had a vanity plate on his SUV that said "MY YAK."
"Tibetan Master" is watercolor and ink on illustration board, 9" x 11", January 1988.
Posted by Pyracantha at 1:39 AM

I love this! I have never seen this before and it seems very diffrent than your other works! I may have to get a print of this from you sometime.