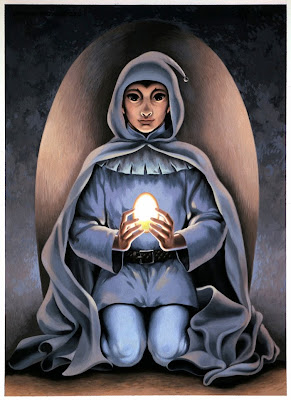 This character is from an obscure fantasy book published in 1978, "The Panorama Egg" by A.E. Silas. It was a story about a modern man who is transported into an alternate fantasy world through the portal of a "panorama egg," an ovoid which shows another world inside it. The egg is presented to him by a mysterious alien sorceress called Mera Melaklos, the character in this portrait. In 1983 one of my fantasy-loving friends commissioned me to do a portrait of the Melaklos character, and this was finished in April of 1984. It is one of the only paintings I have ever posed for myself. I felt an affinity for the character who could walk between the worlds. I didn't use my face, obviously, but the rest of the figure is me wearing a grey hooded cloak and holding an egg. I'm still wandering between the worlds.
"Melaklos" is acrylic on Strathmore illustration board, 15" x 22", April 1984. Click on the pic for a larger image.
Posted by Pyracantha at 1:48 AM