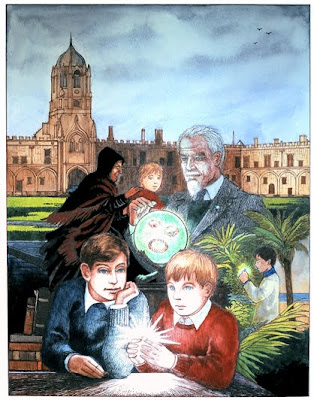 You saw an image I did from Diana Wynne Jones' "Homeward Bounders" a while ago. This is another Wynne Jones illustration from a somewhat earlier assignment. Some friends of mine were planning to produce a magazine devoted to English children's and young-adult literature, called "Pendragon." They persuaded Diana Wynne Jones to contribute an original fantasy story, "The Three Rings," which would be published in the magazine. I was commissioned to do the cover illustration, based on the Wynne Jones story. This is what I created for them. The story has some scenes set at Oxford University, hence the tower and quadrangle depicted in the background. I don't remember much about the story. The image is a mix-up, or montage, of characters and events from the tale. The magazine title and writing was supposed to go over the sky portion of the picture. I also produced a number of black and white interior illustrations for another story by Jane Yolen, a well-known American young people's fantasy writer.
Due to lack of organization and funding, the magazine was never produced, and all the work I did was never seen except by a few people. My records show that I gave this picture to Diana Wynne Jones as compliments of the artist. Now that Diana is gone, I will never know what happened to this picture.
"The Three Rings" is ink and watercolor on illustration board, about 11" x 14", summer 1981.
Posted by Pyracantha at 1:00 AM