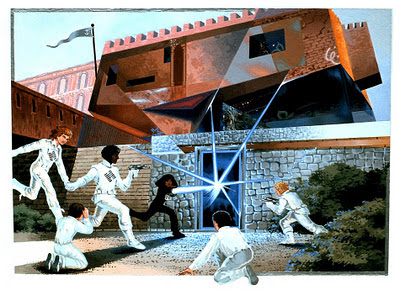 During the early to mid 1980s I was in friendly contact with the late British fantasy author Diana Wynne Jones. I loved her work, though I never read very many of her books. I ended up illustrating a number of her tales for various small magazines. During one of her visits to the USA, Diana commissioned me to do an illustration of a scene from her book "The Homeward Bounders." In this climactic scene, all the main characters storm an interdimensional fortress belonging to the demons who "play" the worlds as a multi-user roleplaying game. The central figure, the girl in black, has a right arm that can shape-shift, in this case into a fiery beam that can shatter the fortress door.
"The Homeward Bounders" is acrylic on illustration board, 14" x 10", Summer 1982. Click on the image for a larger view.
Posted by Pyracantha at 2:52 AM