Persian Angel of the Earth 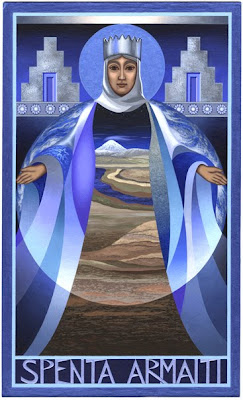 The words "Spenta Armaiti" are hard to translate. "Spenta" is often translated as "Holy," but there is also an element of "creativity" and "growth" in it. "Armaiti" is also many-valued and is sometimes thought of as "Piety" or "Reverence" but it is more often translated as "Tranquility." The allegorical figure in the Immortals is Spenta Armaiti, Holy Tranquility. I have portrayed her as an elder woman, the third of the three ages of woman, and she is attired as a Persian Queen with a crenellated crown. Her guardianship is the Earth and the land, so her body is made up of earth textures and colors, with the sacred mountain of Iran, Mount Damovand, in the distance.
In the background are two crenellations from the royal center at Persepolis, which symbolize mountains. In back of the Immortal's cloak, in a circle, are textures from Earth as seen from space. The colors are all in the dark blue or indigo range, which I assigned to Armaiti in the Immortal spectrum.
The typeface, by the way, which is on all of these Immortal portraits, is one that I made up especially for this series. I call it "Cuneiform." It is inspired by early twentieth-century fonts used in Art Nouveau or Art Deco graphics.
"Spenta Armaiti" is acrylic on illustration board, 8" x 14", February 2000.
Posted by Pyracantha at 2:06 AM

I like it, not sure I have seen this one before...It seems more abstract than the others. I think I would love to see a real outfit made to look like this (it might have to be painted or I guess appliqued).