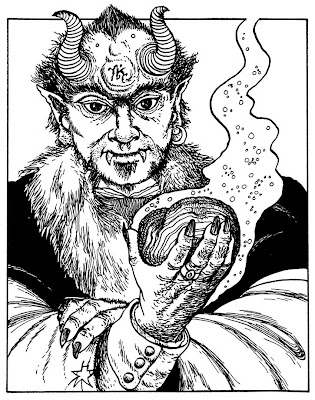 In 2003 I illustrated a role-playing game booklet for a game developer friend of mine, in return for math lessons. I did a number of character portraits, as well as some background scenes and some graphic page layouts. The game was set in a kind of late Renaissance Italianate city full of intrigue and swashbuckling. Its title was "The Powers that Be." The player had to wend his or her way through the winding, cramped streets of the city, encountering all sorts of dangers from street thugs to assassins to corrupt - or incorrupt - politicians.
I illustrated some colorful characters, not all of them human. In this game's world, trolls were not necessarily hostile or fierce. Some trolls went into business selling things to people, merchandise that people didn't want to dig for themselves. One troll product was truffles. The trolls dealt in these stinking fungi which were precious gourmet items. This image is one of those merchant trolls, offering a truffle treasure to the highest bidder.
I did all the illustrations in pen and ink, and colored some of them on the computer. I used Corel Painter, a program I have since abandoned because it was not precise enough to do the things I wanted it to do.
"Truffle Troll" is ink on illustration board, 5" x 7", summer 2003.
Posted by Pyracantha at 2:26 AM

Odd but good! I always love your ink work! So will you post th naughty Lepricans you did for St Patty's Day?