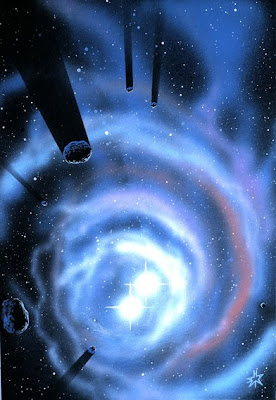 I'm almost finished with my big neutron star picture, so while I'm in the world of extreme astronomy and cataclysmic stellar remnants, here's an earlier rendition I did of a hypothetical pair of pulsars. I am not sure that pulsars, or rapidly spinning neutron stars emitting beams of radiation, can form as a double. The two stars' overwhelming gravity would probably tear them both apart. But perhaps it's a pulsar orbiting with a partner like a white dwarf. This picture shows the two stellar cores with a swirling accretion cloud of glowing gas around them. Floating asteroids cast harsh shadows in the violent light. This would not be a friendly environment for a space visitor; high radiation and gravitational stresses would destroy any traveler who ventured there, except for those visiting in imagination.
"Twin Pulsars" is once again from that long series (there were 13 pictures in it). Acrylic on illustration board, 7" x 10", February 1990.
Posted by Pyracantha at 2:40 AM