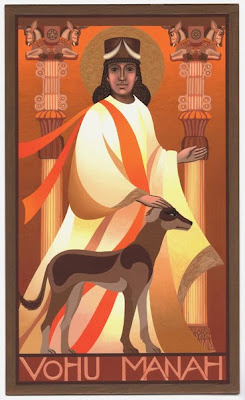 The second of my Zoroastrian Angels is "Vohu Manah." This means "Good Thought" or "Good Mind" in Avestan, the liturgical language of ancient Persia. This figure has many meanings. It is a male character, but rather impersonal in the Zoroastrian religious world. One meaning of "Good Thought" is "Compassion," for all the living things of the world and the Earth itself. Another meaning is rationality, reason, and avoidance of evil, the moral virtues of this Immortal being.
I made Vohu Manah a mature male in his prime, rather than the youthful image of Asha Vahishta (see yesterday's post). I've pictured each Immortal except one, as one of the three ages of man or woman.
Vohu Manah is the guardian of Animals, and I've portrayed him with a dog. Dogs are sacred in the Zoroastrian religion, and in the scriptures they are treated with almost as much reverence as human beings.
In the Vohu Manah portrait I used motifs from the carved capitals of the columns at Persepolis. Animal forms were everywhere in ancient Persian art, such as the bulls' heads and forelimbs on the column capitals. The four symbolic animals of the Christian Evangelists, that is Matthew's man, Mark's Lion, John's Eagle, and Luke's ox, have their origins in these much earlier sacred animals carved into Persian temples and palaces.
"Vohu Manah" is acrylic on illustration board, 8" x 14", January 1997.
Posted by Pyracantha at 1:59 AM

The capitals on the pillars are my favorite part of this picture! The overall design is wonderful as usual!